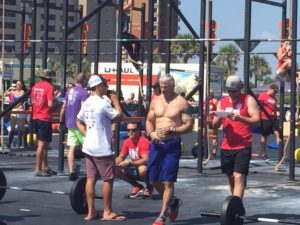 Randy Malikowski is Affiliate Owner and Competitors Coach of Perdido Bay CrossFit. Randy is a native of Seattle, Washington and has been in the field of education and coaching for over 35 years. He holds a bachelors of Arts in Physical Education, bachelors of Arts in Special Education and a Master’s degree in School Administration. He prides himself in his dedication to research and his ability to care for those he coaches and teaches. Randy’s education and training background revolve around helping others to improve. He coached and trained at CrossFit Everett in Everett, Washington consistently from 2010-2013 and was a physical education teacher in the Everett School District for fourteen years until January of 2013 when he married Angela and instantly became an Army spouse faced with many Permanent Change of Station (PCS) moves in supporting her military duty assignments. While stationed in North Carolina in 2013, Randy assisted in the opening of CrossFit Ferus in Fayetteville, North Carolina prior to opening his own garage box in Raeford, North Carolina. In the Spring of 2014, Randy and Angela were able to permanently relocate back to beautiful Pensacola, Florida, Angela’s hometown, and have been blessed with the opportunity of opening Perdido Bay CrossFit.

Randy has also dedicated the last eight years to extensively and passionately researching nutrition. He has found the pinnacle of nutrition for the human body in Paleo. He has helped change hundreds of lives throughout sharing his knowledge of Paleolithic nutrition and the Paleo lifestyle. His knowledge of kinesiology and nutrition can help anyone to change their life to a happy healthier one. He continues to do just that- changing people’s lives individualized one at a time.